About the International Schapendoes Federation

On the 9th of september 2006 the International Schapendoes Federation (ISF) was founded by the Schapendoes Clubs of Denmark, Finland, France, Germany, Luxembourg, the Netherlands, Norway, Sweden and Switserland.

Goal of the ISF is to facilitate an optimal cooperation between the Schapendoes Clubs in order to preserve the health, breed type and good character of our Schapendoes all over the world.

For decades the comprehension has established itself that mankind is faced with problems that cannot be adequately addressed at a national level. Now dog breed may not quite measure up in its importance to problems like global warming, migration, famine, but it is indubitable for all that reasonable concepts can only be expected beyond national boundaries.

Not only in dog breeding internationality is confronted – even today – with suspicion and resistance. This may be understandable. With the assignment of rights but, of course, also of duties to an apparently superordinate institution one‘s own sovereignty seems reduced. However, neither in politics nor in dog breeding there are any alternatives. It is not possible to establish a solid foundation within the narrow limits of a club or country that promises to make responsible goals achievable. Internationalism is essential if one intends to provide a base for the good of the breed.

For years by now, with the International Schapendoes Foundation an institution is being built up for which other breeds envy us a lot. Wise people have become aware years ago that an almost insular situation with corresponding restrictions and limitations cannot be hoped to result in positive consequences in dog breeding. Internal problems contributed additionally to this fact.

So it was almost natural that the desire arose to break out of the national limitation. The establishment of the ESS served as a basis for initial discussions and for a rather informal exchange. Soon it was realized that a proper structure in its own right would be desirable for a regular exchange. The development of a genetic test to combat PRA jointly by the IGS and the VNS constituted the ultimate proof that cooperative action can be successful. 2006, the ISF was founded and since then we meet on the eve of the VNS club show to exchange information from the individual countries and clubs openly and trustfully.

After the usual childhood diseases, the ISF developed into an organization that just because of its supranational disconnectedness has great potential. No doubt it will be up to the commitment of all whether this potential be used in the most effective way or whether it shall lie fallow.

I would first like to mention some of the hopeful approaches of the ISF, which should be built up constructively. At the end, I allow myself to take a look at the future tasks and options of the ISF.

Responsible breeding is based on reliable data. Without it, the selection – and breeding, unlike mere reproduction is always selective! – of suitable partner for mating can only be made severely limited. It is therefore most understandably that information about the health status collected by the VNS since the beginning were much sought-after. After a very changeful procedure, that I may skip here, it was possible a few years ago to bring about a change in consciousness that these very important data should be at disposal beyond any borders for other clubs as well. Thanks to the then President of the VNS Jettie Alberts after many failed attempts in the spring of 2012 a breakthrough was achieved: The Dutch data would be included in a database. National scruples were overcome – international cooperation had a first, not to be underestimated success!

Founded by the VNS and IGS, as well as the DKK and SKK – the Norwegian Club NSK has since followed and others expressed their interest – , now five clubs conduct this continuously growing project “DoesData”, in which all health-related data of these countries are collected as well as inventories and show results. The respective breeding committees can fall back on it at any time and advised their breeders accordingly. Undoubtedly, further improvement of the data situation with view on the reliability of conclusions obtained on the basis of this databank would be highly desirable. Therefore I would want to emphasize at this point that other clubs are most welcome to join the project. I have no doubt that for them as well the available data are highly informative and have inestimable value for their breeders.

Many breeds even have several data programs at their disposal. However, an international data program of this kind is known to me for any race. In future it might develop not only into a central instrument, but as well to a paradigmatic example, what commitment beyond club and private interests is capable of.

If this database and its maintenance is also at the absolute center of our endeavors, there was only last autumn a number of other issues on which made an international exchange absolutely necessary. It must suffice here to name just a few of them: HD/ED and the assessment of its importance in the various clubs, PRA, cataract, as well as other health matters (MPP, RD, etc.). I refrain from a detailed report, but would like to refer to the website of the ISF.

Let me finally come to tasks and desiderata with regard to the program that need to be considered an the future of an international breeding federation. That might sound like dreams of the future today. But not even Europe as a political structure was created in one day. And Europe required visionaries who did not want to settle for tackling all the way in small nudge.

But I would like to state at first what the ISF should not develop into: The ISF shall not become in institution equipped with decision-making powers, which remain reserved to the individual clubs. There would be no legal basis for this nor the necessary requirements. The ISF will not take anything from the clubs, but it shall add an option to their actions: On a platform including the entire breed – as opposed to national or even club-specific sections of information – a broader perspective shall be opened up.

The plenum of the ISF provides the place for exchange – an exchange that can be fruitful only on the basis of trust and equivalent rights of members on an equal footing. Once again I call upon the up to now absent clubs and their chairmen sincerely, to overcome old mostly personal animosities and to join the ISF. In the long run there is no alternative for the breed!

We are all glad and lucky to have been able to eliminate with PRA an inherited disorder that has severely restricted breeding options in the breed. No one will hope that a similar problem would virtually render international cooperation indispensable. Nevertheless, we should take precautions and be prepared. It does not appear very smart to me to wait for a problem to break out and only then to begin to contemplate what could be done. To start collecting data and samples when a problem is already on the table certainly is not very foresightful. For a long time already I plead for the establishment of a blood database. Years ago we started to collect samples at the University of Bern. The Swiss Club has already included the delivery of samples in its breeding regulations. My respect!
As already practiced in the Netherlands and in Germany, it would be most easy to provide a relatively inexpensive way to take samples in the context of club shows or perhaps the ESS.

But also in the collection of health-related data, I would wish for a more direct cooperation. Would it not be pragmatically useful if we could agree on a common health questionnaire with each other? We all have a common goal – and we have a common data program, in which the collected information will be incorporated. Overall, it would certainly be welcome if the clubs and their people in charge could help to coordinate matters. An improvement and intensification of communication is certainly very beneficial for all.

I would hope that by means of an international screening we would come to evaluations such as the health status of the breed, and if there is a decisive problem, to which one should devote an international project.

I would hope as well that mutual advice on questions of choosing suitable breeding partners could take place on a level as a matter of course. There should ideally be no relevant information that would not be at the disposal of the other breeding committees.

I would hope that would enter a discussion with each other about aspects and principles of breeding permissions: The relevance of individual diseases such as cataract and distichiasis is estimated differently by different clubs.

In addition, I would find an open debate about breeding concepts very exciting.

Maybe we can succeed – preparedness and good will of all presupposed – to develop the ISF to a forum that provides the structure for the exchange of experience and information.

Let me appeal to all those responsible in the clubs a third time: Let’s work together. Together we can make and achieve a lot.

The whole is more than the sum of its parts.

Most cordially
Dr. Hans J. Jacobs
(Chairman of the ISF)

After a meeting of the VNS and IGS in Molenhoek on Good Friday I may inform all Schapendoesfriends at home and abroad that we now have a professional data program that shall prove to be future oriented for the breeding of our Schapendoes. 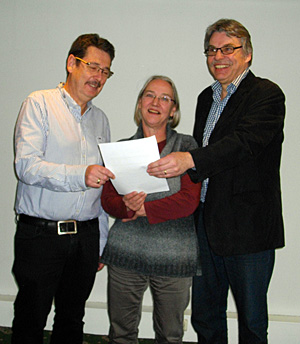 Finally we succeeded in founding an international cooperation which can look back on more than 60 years of experience in breeding Schapendoes. Beside the VNS and the IGS, the Swiss and the Danish club join in! We very much hope that other clubs follow our invitation to cooperate.

This mutual databank offers the chance to get a reliable and exceedingly essential, dense and furthermore growing information basis of data relevant for breeding which shall allow to breed our Schapendoes tomorrow with the highest degree of security thinkable.

Shortly I shall be able to report in more detail about the future procedure.

But already today I rejoice to be able to announce this fact.

I certainly do not want to close these few lines without explicit thanks to all who contributed to the success of this mutual enterprise but before all I thank our friends of the VNS and the IGS of the Swiss and the Danish club.

Many thanks to all & best regards.
Dr. Hans J. Jacobs